YESTERDAY
Hola amigos. I am now in the province of Galicia, starting and finishing the final 113 km from Sarria to Santiago. I will have enough time to collect my Compostela certificate and I hope go to Finisterre, by the sea. I took the TrenHotel, night train, 1:00 a.m. to Sarria. All seats are first class (my bargain 50 euros) and sleepable (my word). I sat next to a Spanish woman and the two of us, not bilingual, were able to communicate very well, with my sign language and very basic Spanish. We shared pictures of grandchildren and where she was traveling and family.

We arrived on time and I left right from train station in Sarria around 10:30 a.m. alone, because by the time I finished putting on my boots and getting myself together, the little station was empty. I had to find my way out of Sarria by asking for the way to The Way! I followed some walkers with backpacks, found the scallop shell on the sidewalk and walked the 23 km stage with my pack, entering Portomarin at 5:30 p.m. On the Way I saw the 100 Km marker, and knew I would find the crowds soon.

When I started out, I had no idea this would be my most daunting walking day so far, harder than hiking over the Pyrenees for sure, mostly because I decided to challenge myself to carry my backpack every day from now on, not send it on, so I could stop when I wanted and not have to reserve the night before. It was hot and I hadn’t much sleep or even breakfast, but I was so determined to walk the entire stage that I didn’t have enough rest stops or food and mostly walked alone.

But, what made the day really crazy was walking a short distance with some peregrinas from the states who were on a tour. I was behind about 20 of the women and ended up walking and talking with one of the hikers who was at the end of the long line. When we got to an arrow on the route, her large group veered to the right and started walking downhill, I thought. I made the mistake of following them. This was the first rabbit hole of about three on my Camino. Lesson learned: look at my own map and don’t assume the people I am behind know where they are going.

Much later I found out they were blocking a sign that informed hikers that this was an alternative route, very steep and risky. Once I started, there was no turning back and I walked so slowly down the steepest and deepest dirt and rock steps I have ever seen. I must admit I was afraid I couldn’t make it down the slippery, loose dirt steps. After a while, I told the woman with me to go on ahead so she wouldn’t lose her group. When I finally emerged from this hole, I was dusty, dirty, thirsty and exhausted, and not there yet.

I had followed the group down this steep “shortcut,” the hardest route for me on all my Camino. The picture I am sharing is one posted on American Pilgrims on the Camino FaceBook Page by James Ryan in 2017. Thank you, James. I did not have my hands free for any picture and was delighted that James shared this great shot. Portomarin is in the distance. He posted this picture as proof that all the pilgrims who cried about this scary, steep rabbit hole were not exaggerating. Some walkers never saw this, as it is an alternative route. This is the reason to consult the mapbook carefully before starting out, or at least don’t blindly follow the pilgrim in front of you.

I passed places to stay but that wasn’t my destination, so I continued walking. Then I saw a long, long bridge and walked over a reservoir or lake towards Portomarin. I thought that was enough for one day, but no, there was one more challenge: a bank of steep steps up to the town. After the dirt steps down the rabbit hole and the long, long bridge, when I saw these steps from a distance, I wanted to cry, I was so exhausted. I walked around trying to find a shortcut, but after about 10 minutes, I just very slowly walked to the top. No choice at the time.

I found the first albergue in Portmarin and was done. It wasn’t even a real albergue, but a hostel type of restaurant-bar, El Mirador, with no amenities for pilgrims like outlets for charging devices or lockers. I had found the recommendation in a guidebook. But, I couldn’t walk one more step and was thrilled to have a stool to sit on at the bar, a cold glass of water and a bed for the night. I had a good dinner in the village, a fine shower and slept well.

TODAY I was a smarter hiker. I left in the dark around 6:30 a.m. with my flashlight, hoping the pilgrims I followed knew the way (yes, one more time following and hoping.) Stopped for desayuno, almuerzo and helado. 24 Km with pack and found great pilgrim accommodations, in Palas de Rei, La Cabana, all private rooms (30 euros for single) and cafeteria and cafes. What a relief. I need some sleep.

I saw my first Horreos on the Way. These buildings, built all over Galicia, are traditional, elevated storage for grain, corn and other crops. They keep rodents away and are off the ground to minimize moisture. There are so many variations on size and architecture, books have been written about their history and design.

Most of The Way has been well-marked, rolling hills, some steep, farmland, a little walking on highway trail, rivers and places to stop to eat and fill water bottles. There are a lot more people on this section for several reasons. Some pilgrims start their Camino here, because it is the minimum distance required to earn a Compostela. Others, walk sections at different years on their vacations, many Europeans, who are close-by and then the final 100 km to Santiago. Some, like me, start at the beginning in SJPDP and hike a distance, then hop and skip sections, until they arrive in Sarria. Or they might be part of church, community or tour groups who want to walk to Santiago and this Way.

The pilgrim must be sure to collect at least two stamps (sellos) per day on the passport/credential. Yesterday was a long, long day for me, with the bridge to cross and the steep steps to climb at the end. I think common sense kicked in this morning and today was how I had hoped a day’s hike would be. Now I’ll enjoy this comfortable room, a good dinner and a quiet night of sleep. I hope.

I already miss Craig Simpson. We’re staying in touch. What a celebration awaits when he walks all 825+ km. Or perhaps each day, each way, is a celebration. If you’re his FB friend, you can follow his journey. Buen Camino. 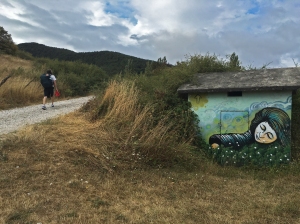